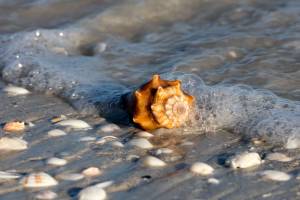 Don’t get us wrong – we’re all about relaxing on vacations. And, when you’re in paradise, it’s hard to argue against spending a day at the beach with a book, drink or both.

But while you’re here, you might wonder what else Sanibel Island has to offer. You might think about what makes this little island in the Gulf truly special, unlike any other place in Florida.

Then look no further than shelling.

Sanibel Island is recognized as one of the best shelling spots in the world. Most islands run parallel with Florida’s coast, mirroring each other which creates a current between the two pieces of land. But Sanibel’s different, running perpendicular against the coast and working as a true barrier island. And because of this, most currents run across Sanibel’s beaches bringing an abundance of gorgeous shells to be picked.

At West Wind Island Resort, we truly have a sheller’s paradise as our beach rests right near the middle spot of our island. From large Lion’s Paws, to Florida Conches and Alphabet Cones – there’s a wealth of shells that wash up on our shores just waiting for you. We even have shell collection bags for you and a dedicated shell cleaning station! Just be sure, when shell picking, your shell treasures aren’t still home for their occupants — live shells cannot be collected, so just return them to the Gulf!

So, grab a pail, a little shovel and find some unique treasures on our beach.